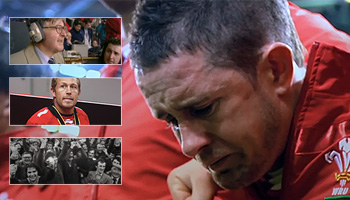 Guinness have struck a chord with rugby fans by releasing a series of beautifully made, emotive adverts that could possibly be described more accurately as short films. They tell the tale of the attitude and achievements of Shane Williams, Jonny Wilkinson, Bill McLaren and the Munster team of 1978. Here’s a look at all four adverts.

Ahead of the Autumn Internationals that kick off this weekend, the videos focus on heros from the four home nations. The campaign first aired on TV in the Uk and Ireland this week, and online the videos have already gone viral, racking up thousands of views.

Rather than focussing on physical attributes, these four films look to inner qualities like humility, dedication, self-belief, and irrepressible spirit. The campaign celebrates the triumph of these qualities, which have helped the ads’ heroes leave a lasting mark on the game.

“It was tough being told that I wasn’t going to make it, just because of my size, but I always believed in myself,” said former Wales star Shane Williams, reflecting on his career. “Every setback made me more determined to succeed. Hopefully my story can inspire other rugby players – it’s proof you don’t need to be built like George North or Alex Cuthbert to make it on the wing!”

Which is the best ad? It’s tough to say, but we’ve chosen to post the Williams video first, and then you can view the other three with a bit more info about each, and some quotes from those involved too.

Merci – Above we see the film about Jonny Wilkinson called simply, Merci. In this unscripted film goes to Toulon, where we hear about how humility and determination can win the hearts of nations. It focuses on Wilkinson’s dedication to the game and his relentless resolve to bounce back from a raft of injuries, leading to him being as well loved in Toulon as he is in England.

“It was an incredible honour to play for Toulon and the support I received from the fans was remarkable,” Wilkinson said.

“All I ever set out to do was work hard every day to be the best player I could be.”

Irrepresible Spirit – This story features the irrepressible spirit of the ‘Voice of Rugby’, Bill McLaren. It shows that it is not the misfortune we are dealt – but how we face it – that really counts. The Bill McLaren Foundation was instrumental in helping create this film.

“Bill would have been absolutely thrilled to be recognised in this way. He never resented the fact that his playing career had been cut short – the way he saw it, life gave him lemons, and he made lemonade. The illness gave him the chance to do something he loved that brought joy to so many people,” said Alan Lawson from the Bill McLaren Foundation.

David and Goliath – This tells one of the greatest stories of Irish rugby, the day that Munster beat a touring New Zealand side in 1978. It reminds us what can be achieved when we choose to defy expectations, as a group of ordinary men defied circumstance to achieve something extraordinary.