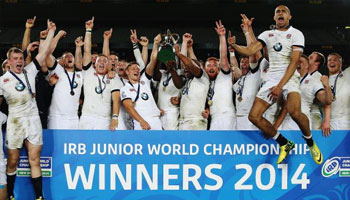 England retained the Junior World Championship title they first won in 2013 as they beat South Africa’s Junior Boks 21-20 in a thrilling final at Eden Park. Above are highlights from the match, with a video of the Best Tries included on page two of this post.

Hosts New Zealand, who lost twice to South Africa, came third with a playoff victory over Ireland, while Australia edged France for fifth place. Fiji, finished the tournament in 12th place, have been relegated to the IRB Junior World Rugby Trophy for 2015.