England break their Springboks hoodoo with convincing win at Twickenham 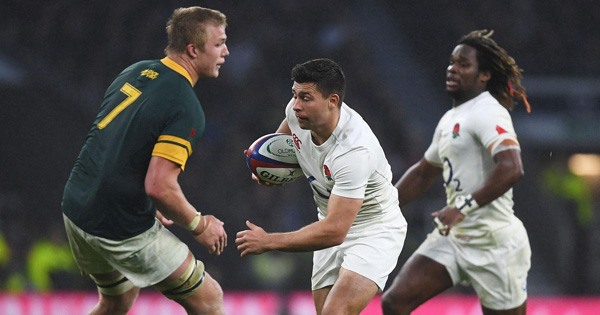 England beat South Africa for the first time since 2006 as they showed superior composure, organisation and execution for a 37-21 Twickenham victory. Mastermind coach Eddie Jones has now led England to ten victories in succession since he took over.

Scrumhalf Ben Youngs was key for the home side, as he twice beat out of position flanker Pieter-Steph du Toit, setting up tries for George Ford and Owen Farrell, following earlier tries by Jonny May and Courtney Lawes.

“South Africa are a huge rugby nation and beating them will give this team another layer of confidence,” said Youngs. “It is another step of building to where we want to get to.

“That is number one in the world and that is another step, but to get there we need to control the ball better, have better discipline and want to put teams under more pressure.

“But there is a lot more to come from us and that is the overriding feeling in the dressing room, we got the result and our campaign under way with a win.”

“England played really well. I think they prepared really well, and they’re a team that’s on form at the moment. Congratulations to them. We just have to be better next week.

“I think mostly it was execution. I think in the wet weather we lost more balls than they did – the weather is there for both teams. I just think they executed better than us.”

Alberts said that they will keep working hard, as they now head to Florence to face Italy.

“I just think we have to find the balance in when we play, when we attack and when we play the kicking game – just a little bit more balance and better execution, and keeping the ball better.

“I think the ball retention is key for us at the moment. I don’t think the game plan… We cannot execute our game plan if we don’t have the ball, so we need to do that better, keep the ball. When I arrived back in the Bok squad, the training is going well and the belief is there. We are trying our best, and the guys want to perform, go out there and play good rugby.

“Unfortunately we are just not putting it over into points and into wins. The belief will always be there when you pull the Bok jersey over your head. You always have a chance and a big responsibility, and I think it’s still there.

“It is tough times, but we will keep on grinding every day in the coming weeks to get the result that we want,” he said.