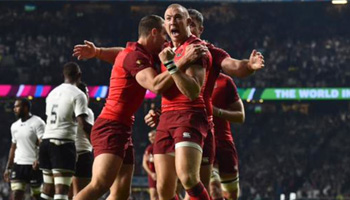 England were not as convincing as they would have hoped to be in the opening game of the Rugby World Cup at Twickenham earlier tonight, but they got the crucial bonus point victory they needed, beating Fiji comfortably 35-11 in front of 80 000 fans.

Mike Brown was excellent on the night, taking the space offered to him and ending up with a brace of tries, as well as the most running metres (172), and a Man of the Match award.

Referee Jaco Peyper and Television Match Official Shaun Veldsmen came under scrutiny for slowing down the match however, with numerous TMO stoppages. While their decisions were well made, the use of Hawk-Eye – which gives the TMO multiple real time angles to work with – slowed down the game somewhat.

In the case of a stunning Fiji try scored by dynamic scrumhalf Niko Matawalu, the try had actually been awarded and the conversion kick was about to be taken when referee Peyper spotted a corner-flag camera angle that showed he had in fact lost the ball.

While that was the correct call, a few minutes later mammoth winger Nemani Nadolo got up high for another excellent effort, and despite it seeming obvious that the try was scored, assistant referee John Lacey stepped in to recommend that the TMO check for offsides, and any other reason why the try couldn’t have been awarded.

It was moments like this that frustrated fans, and perhaps gave us some indication of how the use of technology in this year’s tournament may well become a real problem. That said, the decisions made were correct, and we’ve seen this kind of thing already this year, so it shouldn’t come as a huge surprise.

The game itself struggled to take off as a spectacle, mainly due to the aforementioned issues, a wet ball and no doubt a bit of rustiness.

Fiji were in with a good chance of upsetting England with about twenty minutes to go, but some missed kicks at goal, and perhaps inferior fitness levels, prevented them from doing so.

The hosts did well to fight at the end and push for that bonus point, which was well deserved when Billy Vunipola skimmed the whitewash, but they won’t be all that pleased with the overall performance.

They will however be delighted with the result, as they now have one up on Wales and Australia, who will know that they themselves need to get as many bonus points as possible to edge things in this tightest of tight group of death, Pool A.