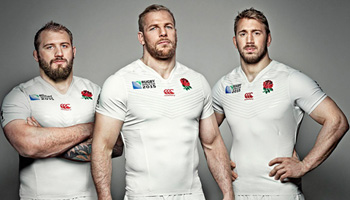 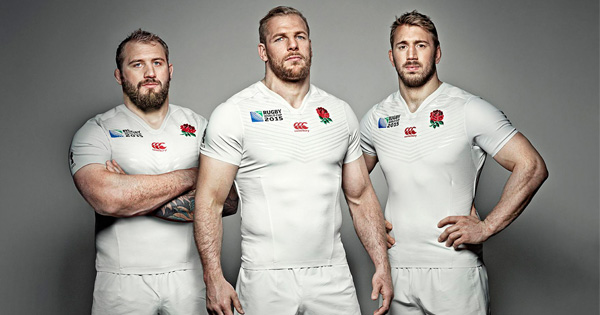 Canterbury and England Rugby have today launched their new Rugby World Cup 2015 shirt, with captain Chris Robshaw revealing the kit to media at Twickenham Stadium. This follows the likes of South Africa, Australia and New Zealand also launching their new World Cup jerseys in the last week or so.

The new shirt features a range of innovations that have been developed by Canterbury and England Rugby across more than 220 hours of testing and over 250,000 miles of travel to improve both the look, feel and performance of the kit.

The rose symbolises the connection between the fans and the players and between former internationals who have worn the shirt and those who wear it now.

In a striking innovative twist the rose has been 3D injection moulded, developed through rapid prototyping technology to standout in a way that merits the significance of the rose for players and fans alike. The shirt also features contoured ‘ball deadening’ grip placement to complement the players’ physique.

On the pitch, players will benefit from a range of innovations, including reduced fabrication weight, minimising moisture absorption for Canterbury’s most lightweight kit ever. The super-enhanced fit technology, developed through position-specific 3D body-mapping supports the varied physiques of the modern rugby player.

Canterbury’s traditional yet innovative loop collar design has been integrated within the shirt, having featured on Canterbury sports apparel since 1949. The 360° loop bound neckline has evolved to withstand every physicality of the game, providing resistance to challenges with enhanced elasticity and shape retention, resulting in Canterbury’s toughest collar to date.

Speaking about the new shirt at the Twickenham Stadium launch, England Head Coach Stuart Lancaster said; “Every player in the squad takes enormous pride in pulling on the England shirt.  As a group, we talk about the unbreakable bond of the rose between former, current and future players and for this symbol to be emphasised in 3D form is a key feature.

“We are grateful for the support of the fans and in the year of a home World Cup the power of the nation behind us can be the difference. It is great that it was the supporters who launched the shirt and that they have been central to the day.”

The new England Rugby World Cup shirt from Canterbury is available now for pre-sale, and in stores from Friday 17th July, as well as at Canterbury.com and EnglandRugbyStore.com