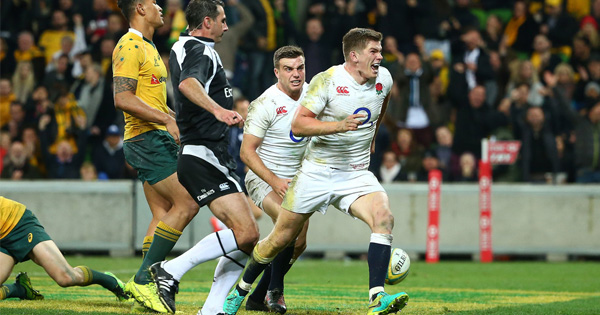 England’s comprehensive 23-7 victory over the Wallabies in Melbourne sealed their first ever series win in Australia. It was built on an incredible defensive performance after the Wallabies had dominated possession but couldn’t break an impenetrable English wall.

The match was a coming of age for Chris Robshaw, who wore the England jersey for the 50th time and along with James Haskell and Billy Vunipola, got the better of the Wallaby loose trio.

The Melbourne turf was fairly disgraceful as it broke up at every scrum, leading to an official statement today from the ARU. They have said that while their are internationals scheduled for AAMI Stadium in 2017, they will have to pass stringent tests for them to go ahead.

The Wallabies had an incredible 74% but England’s tacklers never backed off, as Owen Farrell punished the home side with the boot at every opportunity. He then scored a try of his own late in the game, adding to skipper Dylan Hartley’s 19th minute pushover score.

“I’m pretty gutted about it at the moment, we’ll own the performance and get better.”

The series is wrapped up but the third and final Test will go ahead in Sydney next Saturday.

NOTE: If the video doesn’t work in your country, you can view it on page two