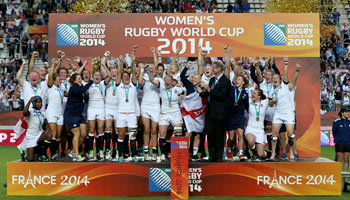 England won the Women’s Rugby World Cup 21-9 after an entertaning final clash with Canada in Paris. A packed house witnessed the England side claim their first tournament win since 1994, after having been runners up in the last three finals.

Canada upset hosts France in the semi final, in part due to an incredible try by winger Magali Harvey, who went on to be named IRB Women’s Player of the Year after the final.

France beat Ireland to claim third place, but it was England who celebrated after many years of heartache at the hands of New Zealand, who suffered a shock exit earlier in the tournament.

England captain Katy McLean said: “This group of girls and this group of staff deserve everything that we have got because we have worked so hard for this.

“So many great legends that have gone before us haven’t won (a RWC) in an England shirt and that was them, and for all of the England Rugby family.”

Post match IRB Chairman Bernard Lapasset commented on the success of the tournament.

“What an amazing way to finish an amazing Women’s Rugby World Cup. The TV and media coverage, the atmosphere at the matches and the way that this tournament has captured the public’s imagination has been remarkable.

“I send my congratulations to England who played so well, but also to Canada who won so many fans here during this World Cup,” he added.

Congratulations to all involved in what was a fantastic tournament, and another step forward for Women’s rugby around the globe. Match highlights from the final are below.