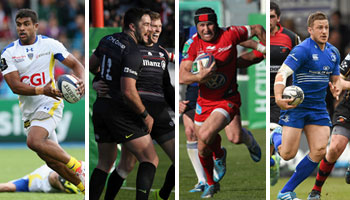 View our previews, focusing on the strengths, weaknesses and key players from each side.

Below are our previews, focusing on the strengths, weaknesses and key players.

Strengths:
Clermont: Their demolition of Northampton in the Quarter Finals was quite simply a Rugby master class. Their pack was solid all match but it was when the backs got the ball in hand and ran with it that they looked most devastating. Clermont must be a team neutrals love to watch, they play fast, attacking and often unstoppable rugby.

Saracens: Saracens’ forward division, or ‘Wolf pack’, is renowned world wide for its ferocity, aggression and affectivity. Masters at dictating the tempo of the game and simply battering their opponents into submission, oppositions’ seldom have a moments rest at set piece and in open play.

Weaknesses:
Clermont: Clermont have made no secret of the fact that they prioritize this European competition over any other, yet have never won it.  Their 46-6 embarrassment at the hands of Saracens at this stage in last years competition, as well as defeat in the 2013 Final will certainly be a weight on the players shoulders.

Saracens: Similar to Clermont, past failures will haunt the London club, most notably last years Final. Also, for all their brute strength there have been questions over their creativity in the backline and they may struggle to deal will the speed of Wesley Fofana and co.

Key Player:
Clermont: Locals in Clermont have taken Nick Abendanon under their wing just as the people of Toulon did to Jonny Wilkinson. He has become a cult hero and a man of the Match performance v Northampton in the Quarter Finals, including scoring a 60 meter solo try and setting up another. His form is so good there have been calls for an England recall for the former Bath man.

Saracens: The forgotten man of the England team, Chris Ashton is arguably in the form of his career. Desperate to force his way into Stuart Lancaster’s World Cup squad the sometimes controversial winger is playing out of his skin, most notably in a headlining grabbing performance in front of a record crowd at Wembley v Harlequins.

Strengths:
Toulon: Where to start. Toulon could arguably change their name to ‘World All Stars’ and nobody would be able to dispute it. The reigning champions have a team full of internationals that have played in the biggest matches on the biggest stages and know how to win. No club has ever won three European Finals on the bounce and that will be used as motivation.

Leinster: When oppositions look at Leinster’s squad on paper it must send shivers down their spines. Healy, O’Brien, Heaslip, Reddan, D’Arcy, Fitzgerald, Kearney(s). Like their opposition this weekend Leinster have a proud history in this competition and certainly have the personnel to add a fourth trophy to their cabinet.

Weaknesses:
Toulon: They may have the biggest names in the game but some of them are getting on a bit and don’t have the legs for a full 80 minutes performance. Domestically, Clermont, Racing, Stade and Tolouse are all breathing very heavily down their neck and Wasps gave them a real fright during stages of their Quarter Final. Toulon is by no means invincible.

Leinster: The game isn’t played on paper. All the big names count for nothing if they don’t gel on the pitch and in the Pro12 this year they just haven’t. Munster and Ulster have taken the reigns as the two best Irish teams and going into this weekend Leinster lie 5th, eight points off the top four. Victory in this game might be essential to save their season.

Key Player:
Toulon: When Jonny Wilkinson retired many people feared Toulon would dip in form without their talisman there to pull the strings. Step up Matt Giteau. The former Wallaby has matured fantastically and has not shied away from becoming the figurehead of this great squad. Strong in defence, dangerous on the front foot and calm under pressure, other players will look to him should they need inspiration on the pitch this weekend.

Leinster: Sean O’Brien is no doubt one of the best versatile back row players in World Rugby. Strong at the set piece and strong in defence but Big Sean comes into his own on the front foot, running at and often through opposition when carrying the ball forward. Expect him to be up for this game and be weighing himself up against some of Toulon’s big defenders.

Strengths:
Edinburgh: Determination. Their Quarter-Final with London Irish saw them take the lead, lose the lead and then go on to win impressively. They have already beaten the Dragons this season and will need to display some real grit and tenacity to reach the final.

Newport: Form. The Dragons come into this fixture off the back of four victories, including a hugely impressive victory over Leinster on Sunday. That run also includes a victory over high flying Ulster so confidence will be sky high as they attempt to reach their first ever Cup Final.

Weaknesses:
Edinburgh: They’re unpredictable. After recording away victories against Irish and Scarlets they were rolled over by Munster at BT Murrayfield. It’s impossible to call which Edinburgh side is going to show up and consistency is required to win the biggest games.

Newport: Their away form isn’t particularly impressive, having only won 3 Pro12 games away from Rodney Parade this season. They are also prone to giving away sloppy penalties and conceding unnecessary points to the opposition boot.

Key Player:
Edinburgh: Tim Visser has been the leading Pro Direct try scorer last 4 seasons and has already scored against the Dragons in the Pro12 this year. He recently announced he is leaving for Harlequins this summer and will be keen to go out on a high with some silverware.

Newport: Taulupe Faletau was arguably Wales stand out performer in the 6 nations, looking strong in all aspects of the game. Flirting with the idea of signing a centralized contract and staying with the Dragons for the forseeable future, Faletau is world class act with experience playing at the highest level.

Strengths:
Gloucester: On their day Gloucester tick all the boxes. They have a solid scrum, quality halfbacks and a backline with the ability to make something happen from nothing. They are the only team to have won every game so far in this competition and having the Kingsholm crowd behind them will also be a huge bonus.

Exeter: Despite being a Premiership side for over five years the Chiefs are still underrated and underestimated by their opponents. They are no longer a side trying to adjust to Premiership Rugby, instead they have a squad full of internationals, are one of the top points scorers in the league and beat the big clubs regularly.

Weaknesses:
Gloucester: Unforced errors, be it over thrown lineouts, missed tackles or knock-ons they have plagued Gloucester’s season so far and they have often been their own worst enemy. A lack of experience in some key positions could also prove costly.

Exeter: Despite the Chiefs being in frightening form all season and establishing themselves as genuine top 4 contenders they have been prone to the occasional hic-cup. Losses away to Newcastle and London Irish, as well as home defeat by Gloucester blotch their otherwise impressive results chart.

Key Player:
Gloucester: Matt Kvesic has been in spectacular form for the Cherry and Whites this season, flourishing under the coaching of back row expert Laurie Fisher the young 7 has become a breakdown specialist, getting hands on the opposition ball at every possible opportunity. He has more turnovers and tackles in the competition than anyone else to date and expect him to add to his tallies.

Exeter: Thomas Waldrom has been a try-scoring machine all season from the back of the scrum for the Chiefs. 13 tries in 19 Premiership appearances is a fantastic return. Combined with his experience in the big games and ability to wind up the opposition the former England international will be key to Exeter winning this game.