Even in defeat Tongan fans show true passion and support 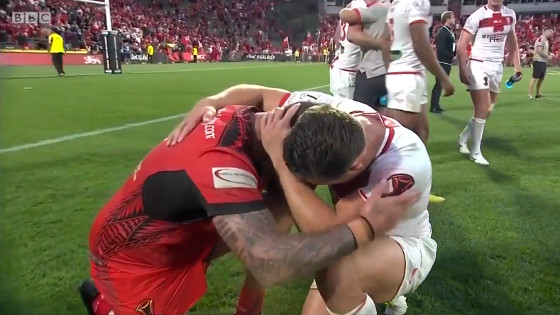 As the autumn internationals in the game of Union were getting underway across Europe on Saturday, a cracking and contentious Rugby League World Cup semi-final had occurred mere hours before at the MT Smart Stadium in Auckland.

As Tonga and England lined up pre-match many were expecting a tight yet open flowing game. Despite taking control early on England were forced to defend a strong comeback from the men in red with a late controversial referee decision to not award Tonga a try a major talking point.

The ending will be something that will be debated at length and many will have differing views, but something very special was on display not just during the match but also in the moments afterwards.

As both sides tried to gather themselves following the final whistle, as England won 20-18, a sound was heard rising from the crowd. The Tongan supporters, who had come out in big numbers and with huge belief, began to serenade their players even in defeat.

Even as England captain and man of the match Gareth Widdop spoke with the BBC, what could be heard was a truly rousing number. You can see the emotional video below.