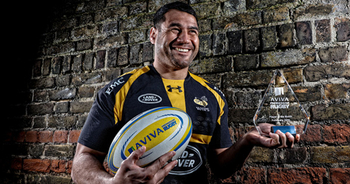 George Smith is regarded as one of the best flankers to have ever played the game, and now at 35-years-old and after just one year in England, he has been named as the Aviva Premiership Rugby Player of the Month for February.

The Wallaby great has had a fascinating career, seeing him playing rugby in four different countries, whilst also having won 111 Test caps for Australia.

Smith has just completed what was an incredible month with Wasps, helping them to an unbeaten four weeks that included big victories over Saracens and Harlequins, and a move up the Premiership table.

“We’ve all been there; you get to 35 and your brain tells your body to do something and it says no,” said BT Sport analyst Austin Healey. “This makes this season’s performances of our Aviva Premiership Rugby Player of the Month all the more remarkable.

Smith was involved in a three-way battle for this month’s title beating Newcastle Falcons’ Andy Goode and his Wasps team mate Dan Robson into the runners-up spots.

“Age aside, George’s performances for Wasps have been nothing short of sensational this year. I genuinely believe Wasps would not have got more quality had they signed Richie McCaw,” Healey added.

“George is high on tackles, high on breakdowns and high on all the stats, but that doesn’t tell the whole story. It’s George Smith’s reading of the game and his link play that could just carry Wasps to a major trophy this season. I wish I was 35 all over again!”

Smith spent a large portion of his career under the guidance of new England coach, Eddie Jones. In this World Rugby feature Smith talks about Jones’ influence on his career, his relationship with the Japanese and says that with all the youngsters around him, age isn’t an issue.

'As tough as it has ever been' - Wayne Pivac