FANTASY RUGBY: Rugby Championship Round 1 Team of the Week

Week one of the 2017 Rugby Championship is in the books and those of you who made some good picks in our Rugbypass Fantasy Rugby will now be sitting pretty. If you’re still on the fence about joining or need some tips for next week, here’s a recap.

Today we take a quick look at some noticeable standouts and the team of the week, should you need some helpful information going forward.

The first half of the Bledisloe Cup Test more than likely justified an over-abundance of All Black starters for your lineup. That being said, there were a few names worth mentioning above the others.

Ryan Crotty, Centre (25.7) – Perhaps slightly overlooked in part because of his midfield partner – Sonny Bill Williams. However, Crotty has fully come into his own and is highly reliable. He continued his great play from the first Lions test by scoring a brace.

Rieko Ioane, Wing (27) – The depth at the wing position in New Zealand is frightening. Ioane was able to quiet the fading questions about Savea’s absence from the squad. Like Crotty, he also scored two tries and made 132 metres.

Israel Folau, Fullback (19.50) – Although Damien McKenzie had an outstanding game, Folau managed to nudge ahead on the scorecard. Both scored tries, but Folau had the edge with metres, carries, and defenders beaten.

Adam Coleman, Lock (7.8) – Along with Eben Etzebeth, Coleman was able to deny both Retallick and Whitelock a spot on the first team.

The Springboks were able to start their 2017 campaign off on a winning foot with their physical win over the Pumas in Port Elizabeth 37-15. There were a few new faces in the squads. However, there were enough veterans to reward owners for the less-risky picks as well.

Eben Etzebeth, Lock (10.8) – Continued his second-row dominance over a couple of hard-working Puma Locks. Along with Coleman, he scored well enough to take the top spot.

Siya Kolisi, Flanker (12.2) – It was a nice homecoming for Kolisi as he scored a try for the home-town crowd. He was certainly a cheaper option than either Michael Hooper or Sam Cane and – along with Liam Squire – rewarded those who played it risky enough to start him.

Agustín Creevy, Hooker (9.7) – Ever the hard-worker and a very reliable pick, he would’ve gotten a few extra points for those who went with him over All Black Codie Taylor.

If you’re still sitting on the fence about joining, take this opportunity to join the fun. It’s not too late… yet.

WEEK ONE TEAM OF THE WEEK: 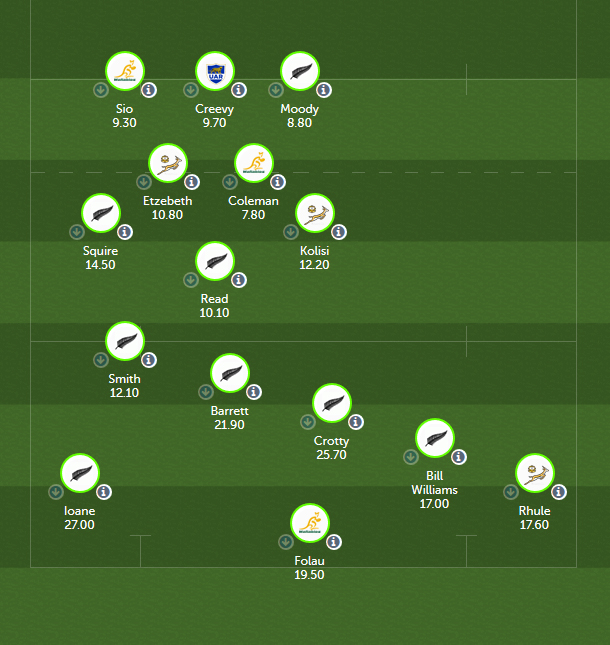