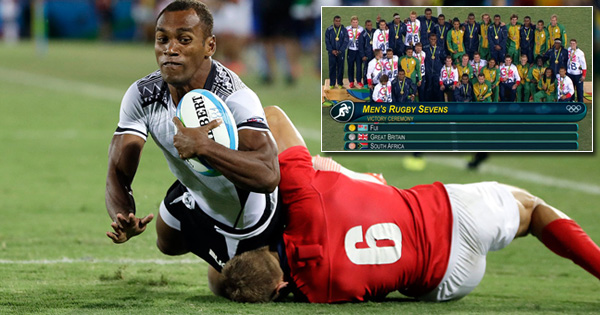 Fiji made history as they won their nation’s first ever Olympic medal, with Gold in the Men’s Rugby Sevens after thrashing Great Britain 43-7 in the Rio final. The Silver medalists were no match for a thrill-a-minute Fiji side, who were full deserverving of the overall win.

Match their Rugby World Cup 2015 position, South Africa won their third place playoff to take Bronze, also proving too strong for Japan with a punishing 54-14 victory after slipping up 7-5 against Great Britain earlier in the semi finals.

Japan finished fourth overall after doing wonderful things for the sport in their country, ahead of hosting the World Cup in 2019 and the Olympics in 2020.

Fiji’s win sees them becoming the first men’s rugby Olympic gold medalists in 92 years, and the first ever men’s rugby sevens gold medal winners, a title they so richly deserve.

Showcased on sport’s biggest broadcast stage, rugby sevens at Rio 2016 has been a hit. With its fast, dynamic and entertaining format, sevens has reached and inspired new audiences around the world as social media buzzed with excitement.

The opening half of the final was a masterclass in sevens. Tries by inspirational captain Osea Kolinisau, Jerry Tuwai, Jasa Veremalua, Leone Nakarawa and Vatemo Ravouvou gave the Fijians a seemingly unassailable 29-0 lead at half-time.

After the interval, Fiji extended their lead through Josua Tuisova before Dan Norton got Great Britain off the mark. However, Viliame Mata rounded-off a polished performance by the Fijians, who ensured their place in sporting history on an emotional day for their nation.

South Africa defeat Japan 54-14 to win bronze
South Africa bounced back from their semi-final heartache in fantastic style, defeating a spirited Japan 54-14. Japan, one of the stories of this dramatic sevens competition, could not find an answer to the sheer pace of the South Africans, but can take great pride from their stellar performances in Rio ahead of the Tokyo 2020 Games.

Semi-final: Fiji 20-5 Japan
Series champions Fiji ended Japan’s gold medal dreams with a 20-5 victory. Leading 10-5 at the break thanks to tries from Vatemo Ravouvou and Josua Tuisova, Fiji showed their series-winning class and composure in the second half, adding tries through Semi Kunatani, Jerry Tuwai to guarantee the nation’s first-ever Olympic medal.

Semi-final: Great Britain 7-5 South Africa
Great Britain had to withstand late pressure to book a place in the final. Trailing 5-0 at half-timel after Kyle Brown’s superb try, Great Britain rallied, combining punishing defence with superb attacking enterprise to snatch the lead through the pace of Dan Norton. With time running out, South Africa pressed for the win, but Team GB’s defence held firm to guarantee a medal.

Positional play-offs
In the other matches, world champions New Zealand ended on a high to be ranked fifth after defeating Argentina 17-14, while France claimed seventh with a 12-10 win over Australia. The USA bounced back from disappointment on the opening days to record a 24-12 win over Spain to finish ninth, while Kenya defeated hosts Brazil 24-0 to claim 11th place.

By all accounts rugby in the Olympics has been a huge success. Rugby fans certainly got behind it, and the crowds for both the women’s and men’s were impressive.

It’s a true showcase of Olympic values and there is no doubt that some of the skills, physicality and sportsmanship on show makes it worthy of staying in the games for a long time to come.

Congratulations once again to Fiji, and to all those players – after a highly documented process of finding the 12 best for each squad – that made it to the Games, and can now rightfully call themselves Olympians.

Gold medalists Fiji showed great humility during the medals ceremony, not only lowering to their knees to receive their rewards, but when the spotlight was firmly on them and their moment, they pulled together both of the runner up teams and mixed amongst them for hand shakes, hugs and a very special photo. Most (if not all) of these guys come from the humblest of backgrounds and remain that way despite being THE best Sevens players on the planet right now. It was special to watch. Much respect to the Fiji team and the beautiful island nation. #rugbyfamily ????????????????