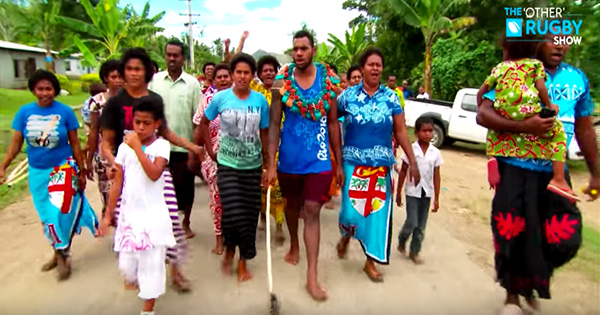 Sean Maloney and co from The ‘OTHER’ Rugby Show recently had the wonderful opportunity to accompany Fijian Sevens star Semi Kunatani as he returned to the village of Naveyago for the first time since winning the Gold Medal in the 2016 Rio Olympics.

A star and hero to many back home, Semi was highly influential throughout the tournament as well as in the final, as Fiji demolished Great Britain 43-7 to take their first ever Olympic gold medal.

What followed was a beautiful and heartfelt journey, well off the beaten path and away from the bright lights of mainstream rugby, to where Kunatani calls home.

As you will see, the significance of this moment was not lost on special guests Maloney, George Gregan, Stephen Hoiles and Australian 7s star, Tiana Penitani.

Emotions were on full display as Kunatani recounts his journey to the village, and we also learn that several women from the village helped to raise Kunatani after he lost his mother when he was just a teenager. Thus, forcing him to pick up farming as a means of survival.

“Amid the chaos, five women emerge and embrace the sevens star. Each of them burst into tears as they stroke his face and hug him,” Maloney recounts in his emotional Fox Sports column today.

“These are the ladies who loved and raised an Olympic champion. Tiana starts to well up, so too Hoilesy. I slip the sunnies down across the face, it’s already too much.”

Kunatani was also one of several who were awarded the prestigious Office of the Order of Fiji medal upon his return. With national pride shining on every face, and few dry eyes in sight, it’s refreshing to see exactly what kind of impact the Gold Medal has had on the people of Fiji.

“Inside the hall now and facing back toward the whole village, Semi stands and speaks. He cries, the town cries. We lose it. This is every hero moment in every sporting movie you have ever seen, to the power of a million.

“He gives thanks to his people, this is their moment he says. We’re left wondering if there’s ever been a more humble team of Olympic champions in the history of the Games.”