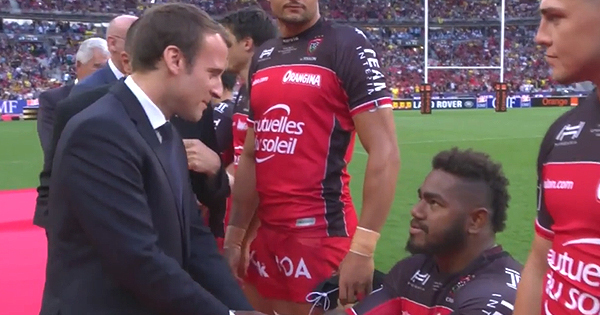 Clermont Auvergne secured their first Top 14 title since 2010 after beating Toulon 22-16 in Paris. It was an incredibly tense encounter throughout, but one moment prior to kick-off showed the more human side of professional rugby.

Both Toulon and Clermont fielded Fijian players and, much like their culture, they demonstrated a remarkable sign of respect and humility as French President Emmanuel Macron greeted both sides.

Josua Tuisova of Toulon and Perceli Yato and Alivereti Raka of Clermont bent down on one knee to greet President Macron to reflect Fijian tradition. It is a custom in Fijian culture to bend down in front of royalty or heads of state.

It isn’t the first time we have seen this kind of act from Fijian players. The Olympic winning team from last year’s Rio Games similarly bent down to receive their gold medals.

Their display of respect once again highlights that the human element remains strong in the face of professionalism.