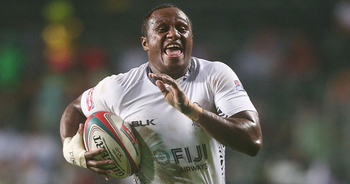 Today Fijian superstar Pio Tuwai turned 33, so to celebrate his birthday we’ve got this short clip from a tournament some time back, showing exactly the kind of skills the big man possesses. Unfortunately he didn’t go to the Olympics due to injury, but this shows the depth Fiji have.

While he is a formidable 6ft5 and 108kg’s, Tuwai is one of the most talented players on the World Sevens Series, and has become well known for his ability to offload in the tackle, getting the ball to players around him with some miraculous passes on countless occasions.

He wasn’t able to get to the Olympics, but he did have a family member there – brother Josua Tuisova. The Toulon powerhouse winger was one of the stars of the tournament, bringing an added physical element to their attacking prowess out wide.

Before it kicked off in Rio, Puwai had nothing but support for his younger brother. “I want to wish my brother and the team well. I did not make it but my brother is there so it is fair and square.”

Talent clearly runs in the family, and if those two aren’t enough to deal with, there is another professional rugby playing brother too, Filipo Nakosi, who plays for Agen.

Reflecting on the Gold winning effort of the Fiji team, coach Ben Ryan said that it wasn’t just the 12 players who went to Rio that made it happen. He thanked all the others involved, including Tuwai.

“If it wasn’t for those players we wouldn’t have won the gold medal because the 17 matches we had at Uprising Beach Resort, where we went bone on bone full on, was harder than any Olympic game we played.”

The World Sevens Series kicks off in Dubai on December 2nd, with Fiji as defending champions.