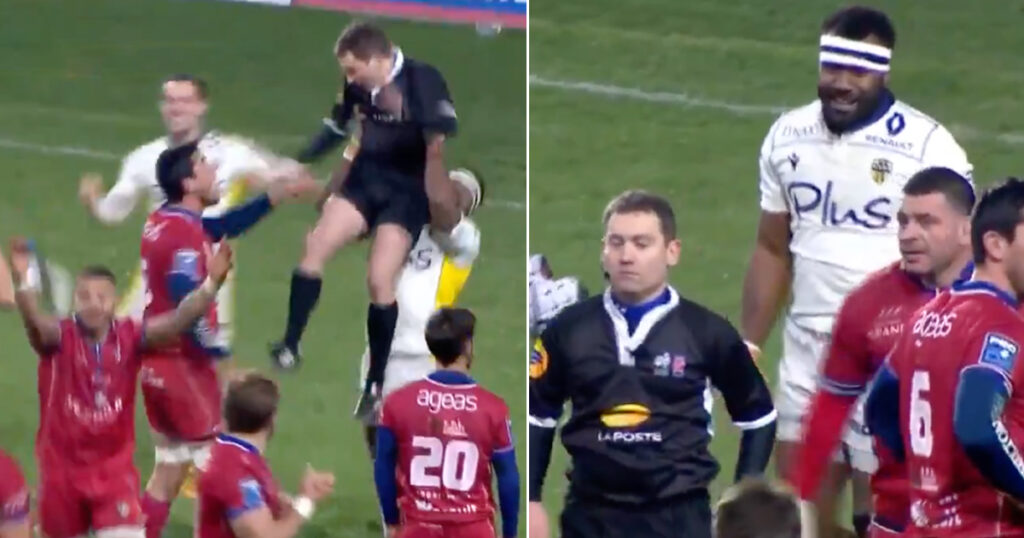 Josaia Raisuqe, who became a viral sensation for all the wrong reasons has been cited and will have to face a disciplinary hearing this week. The Fijian back finds himself in trouble after he celebrated in a possibly never-before-seen fashion.

The big Nevers winger was celebrating a dramatic refereeing decision in the Pro D2 (French second division) match against Beziers, but did so by picking up the referee as if he was a baby Lion King.

Red carded for the way he lifted referee Laurent Millotte, Raisuqe has been summoned by the disciplinary commission of France’s LNR (National Rugby League).

The 26-year-old will need to defend his case on January 20 (Wednesday) with a suspension of some kind looking likely.

As Irish referee JP Doyle explained in a very funny interview after the incident, some kind of precedence will need to be set, or we’ll end up with players do all manners of things to referees, thinking it’s OK.

“You need to red card it. Because what if someone does something next… What if someone puts him in a headlock and gives him a friendly noogie?

“Where do you draw the line? You can’t lift the referee in the air like Lion King.”

Raisuqe was suspended pending the outcome of his hearing.

Video: 'One of the worst' - Terrence Hepetema red carded for 'very bad' tackle

With Beno Obano the only player released by Eddie Jones to play for his club this weekend, we can only assume there’ll be changes to the England team to face France next week.

Chiefs boss Clayton McMillan has identified two key areas his side need to work on following their 39-23 defeat to the Highlanders in Hamilton.

Standout Highlanders wing Jona Nareki wasn't the only speedster to have caught the eye in Friday's Super Rugby Aotearoa match.