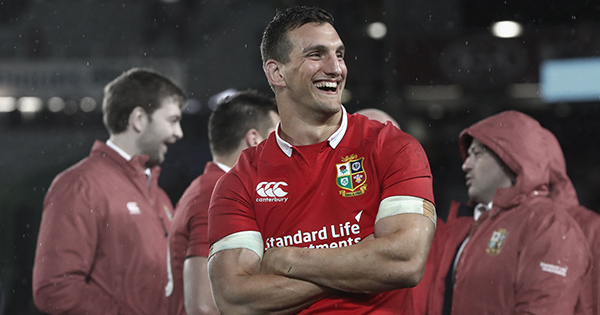 Plaudits abound for Sam Warburton, who today announced his retirement from the game with immediate effect. Still under 30-years-old, his body has not recovered from the wear and tear of high level professional rugby.

The Cardiff Blues, Wales and British & Irish Lions flanker played his last match a year ago, when the Lions drew with the All Blacks. He has since been working hard to recover from neck and knee surgery, but it soon became clear that he would not be able to play at the same level again.

“Unfortunately, after a long period of rest and rehabilitation the decision to retire from rugby has been made with my health and wellbeing as a priority as my body is unable to give me back what I had hoped for on my return to training,” he said in a statement.

“I cannot thank the Welsh Rugby Union and Cardiff Blues enough, who have gone beyond the call of duty, in providing the support I received to help me get back on the field, for which I will be forever grateful.

“Since I first played aged 10 at Llanishen Fach Primary School, then Whitchurch High School and Rhiwbina Juniors RFC, I always dreamed of playing for my hometown club the Cardiff Blues, Wales and the British and Irish Lions. To look back on my career, I’m extremely proud of what I managed to achieve.

“There are so many people who helped me along the way from schoolteachers, coaches, friends and family. I thank you so much for supporting my dreams and aspirations. I hope they too can take some pride from my career.

“I would like the make special mention of Warren Gatland. Without the faith he had in me and his unwavering support I would never have had the career I was able to pursue.

22 – Sam Warburton is the youngest player ever to captain a side in a Rugby World Cup match, he was 22 years and 341 days old when he led Wales against South Africa at the 2011 edition. Leader. pic.twitter.com/N8hpUcVken

“Countless people work behind the scenes in professional rugby but I would like to thank to the fantastic medical teams at both WRU and Cardiff Blues who have looked after me throughout my career.

“To my amazing wife Rachel and my close family and friends who have endured the emotional rollercoaster of playing professional rugby, I am so lucky to have such a fantastic support network and loving family to help me get through all the testing times.

“Lastly, to all the many fans, with whom I’ve shared some fantastic memories with, from the bottom of my heart, thank you so much for all your support.

“From providing a random hug in a supermarket, or simply offering words of support and encouragement, to hearing a cheer after my name was announced at the national stadium, you are what makes playing professional rugby so special and such a privilege.

“It’s been an absolute pleasure to represent you all and an honour I’ll sorely miss.

“As one chapter finishes, another begins, which I’ll enter with the same level of passion and determination as the last.”

Warren Gatland said: “It is hugely disappointing that Sam has retired from the game. He is an outstanding rugby player and he has brought so much to the game on and off the pitch.

“His leadership, attitude and demeanor along with his performances have placed Sam up there as one of the best and most respected players in the world. He finishes with a record that he should be extremely proud of and should look back on his career with huge pride.”

BREAKING: @samwarburton_ has announced his retirement from the game. He led Wales for a record 49 times in his 74 appearances.
#ThanksWarby pic.twitter.com/BOCahUsJ6O

“In a test career full of great moments, one in particular sticks in my mind. His captaincy in the third test for the Lions in New Zealand, in a game finely balanced and potentially historic, was exemplary. The New Zealand media were mightily impressed by him, and rightly so.

“I hope he can take the time to reflect on a magnificent career and I hope he gets as much pleasure from whatever he does next as he has brought to the people of Wales and the wider rugby public.”

With 74 Test caps for Wales and a further five for the British & Irish Lions, the 29-year-old also led his country a record 49 times. He will go down in history as the most successful Lions captain of all time, having led the Lions on two tours, in 2013 and 2017.