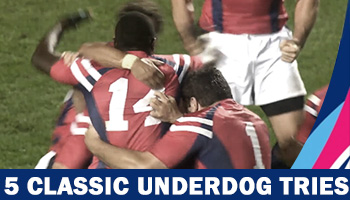 Throughout the history of the Rugby World Cup, we have seen plenty examples of top tier nations being dutifully undone by their supposed minnow opponents. As ardent supporters of underdogs, we thought it apt to relive some of the best ‘giant slaying’ tries of tournaments past, with this great top five put together by World Rugby.

Despite failing to secure a victory in 2007, Japan lit up the tournament with their incredible and at times, ridiculous counter attacking. They scored perhaps the try of the tournament, when Kosuke Endo finished a superb coast-to-coast effort in the 72-18 defeat to Wales in Cardiff.

Try number two harks back to 2003 and the introduction of Rupeni Caucaunibuca. The then 23 year-old Fijian monster steamrolled through countless Scottish defenders to score the first of two stunning tries. Fiji would agonisingly lose the match, and a potential place in the quarter finals, thanks to a late David Hilton try for the Scots.

Sukanaivalu Hufanga’s fantastic try for Tonga caused one of the upsets of the tournament four years ago when they beat France 19-14 in Wellington, while Richard Tsimba scored an excellent solo try in Zimbabwe’s narrow 21-20 defeat to Romania in 1987.

Competing for try of the tournament with Endo’s Japanese effort at Rugby World Cup 2007 was a similar length of the field score, this time for the USA.

Todd Clever’s well timed interception and ferocious hand-off on Springbok flyhalf Butch James, combined with Takudzwa Ngwenya’s searing pace to round Bryan Habana, proved one of the moments of Rugby World Cup history, and epitomised the spirit of perserverence.