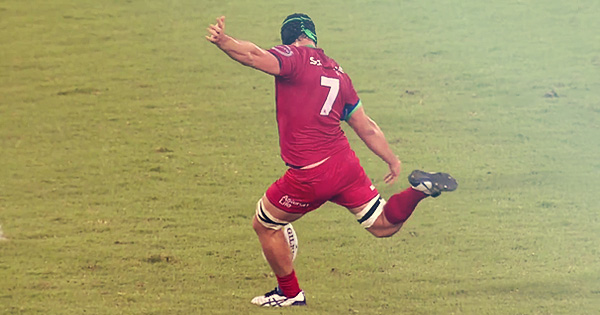 The Bulls were comfortable 41-22 winners over the Queensland Reds in Pretoria on Saturday, but the visitors came up with one of the moments of the match just short of halftime.

The Reds had advantage as the hooter sounded, so as flanker Liam Gill found himself at first receiver, he decided that a drop at goal was on. He struck it sweetly and it rocketed over with plenty to spare. If that was good, his nonchalant reaction was even better.

“It was almost a brain explosion if it had missed, but we had advantage and I knew it was half-time so I thought I would step back, take the duties and have a crack,” Gill said.

“I’ve put five years of practice into it so it was awesome to see it come off.”

Gill has been Test capped 15 times but with a number of top talent to compete with – including David Pocock and Michael Hooper – he has failed to cement that regular starting position.

Perhaps if Bernard Foley gets overlooked, we might see him at number ten instead.

You can see the kick as part of the match highlights above (0:52). There were also some great tries scored, so watch the whole video if you have the time.