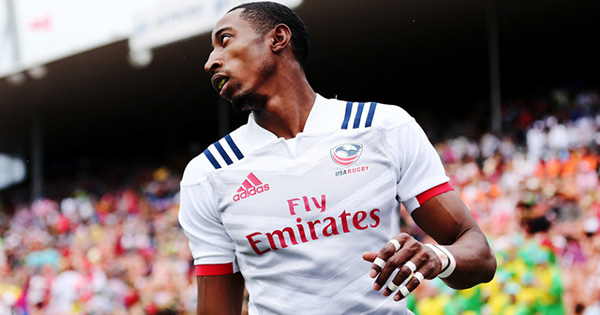 Sevens superstar Perry Baker is well known for his extreme pace and try-scoring ability. But we can add flying to the list of other-worldly talents he possesses after he soared to snag this restart against Samoa at the Hamilton Sevens last month.

Baker will be one of the USA stars on show at their home event this weekend, as the Las Vegas Sevens kicks off at the Sam Boyd Stadium later today.

In Hamilton Baker looked more like an Eagle than a player, as he defied the laws of gravity to gracefully leap what seems about 20 feet into the air to collect Folau Niua’s kick.

While he may not have the size of your typical rugby player, any questions about his skill and ability to play – and dominate – the Sevens scene should be long answered.

Hamilton runners-up South Africa are top of the overall table going into Las Vegas this weekend, with all sixteen competing nations looking to secure valuable points which will help them climb the series table and improve their Rugby World Cup Sevens seedings ahead of San Francisco in July.

As this clip shows, for Baker anyway, the sky is quite literally the limit.