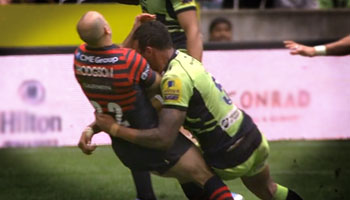 Fresh from double finals success, Northampton Saints lock Courtney Lawes is raring to go and full of confidence ahead of the series against New Zealand. He had another excellent game on Saturday, including one massive trademark hit in particular.

Lawes played a big part in the Saints’ 24-20 Aviva Premiership final win against Saracens at Twickenham, as well as the strong season, but now shifts focus to the All Blacks, who have at least one player on their side that doesn’t really seem to know who he is.

When asked about the England squad, New Zealand’s Brodie Retallick struggled to name any of them. When pushed for an answer he said ‘Michael Lawes’. He might have gone blank, genuinely doesn’t know, or it was simply a deliberate attempt to wind up the tourists and media.

If the latter, it seemed to work as just about every rugby newspaper or website published a story about it this week (and now we can be added to that list).

Unavailable for the first Test, Lawes says that there are just two big games left in the season, so he’s relishing the challenge. “Most of our players who are going to New Zealand produced good individual performances. I’m going to go there brimming with confidence, ready to enjoy myself.

“It has been a very long year, but it’s just two more games, so you’ve just got to crack on. You will always be up for a Test match – we will fire into them. I am going to go out there looking to enjoy myself, get ball in hand and build on this confidence I’ve got through the season,” he said.

On Saturday Charlie Hodgson found himself on the wrong end of hard-hitting Lawes as the Saints lock launched into him with a trademark hit, something we’ve seen repeatedly over recent seasons. Respect to Hodgson though, now 33-years-old, who took it well and hopped straight back up.