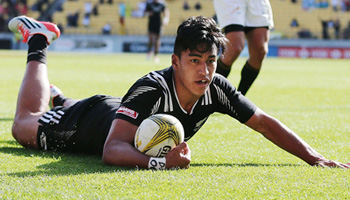 There must be something in the water down in New Zealand. First “Tongan Thor” came out of the woodwork (but now plays his rugby in Australia), then another diamond prospect appeared, first emerging aged 17, and looks set to be fast tracked into international rugby.

Aucklander Rieko Ioane burst onto the stage in February during the Wellington leg of the World Sevens series. Only out of school for 3 months, Rieko Ioane was one of the most important players for New Zealand.

One of four debutants on the weekend, Ioane scored a try in the semi-final and 2 in the final against England to secure the win. The media have described him as ‘big as Sonny Bill, faster than Folau’, and judging by the video, they aren’t far wrong.

Whether stepping 2 round the outside, flattening a defender or putting in the hit himself, it is hard to believe that Ioane was just 17 years old at the time, having needed his parents’ permission earlier in the week to play in an open tournament. He turned 18 in March.

He actually comes from solid rugby stock. His father Eddie played lock for Samoa, while mother Sandra represented the Black Ferns. Older brother Akira, just 20, made a name for himself with the Blues in Super Rugby, as well as with the Under 20 All Blacks.

Sevens rugby is a great channel for showing young talent. It is a much faster version of the game, needing all core skills to be at the highest standard. The skills it teaches about space, handling and individual ability are vital in the 15-a-side game.

Many of rugby’s greatest started their careers in the cut down game, Dallaglio and Dawson both won the World Cup with England before the 2003 trophy, in 1994 a certain Jonah Lomu took Hong Kong by storm, and then Julian Savea emerged in 2009.

Ioane was given a chance, and made the most of it. He looks set to make waves, and if his selection for the Maori All Blacks to play Fiji is anything to go by, he’s on the way to being a senior Test player in the not too distant future. Brother Akira is a pretty handy player himself.