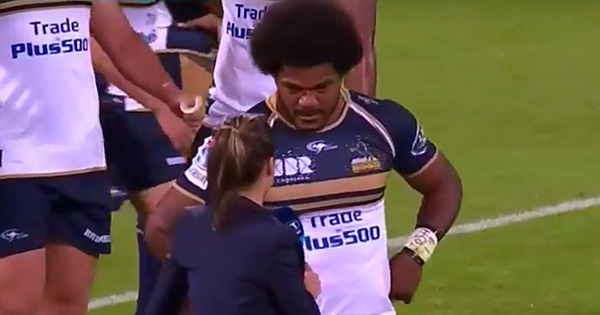 The guys at Fox Sports Australia are known for their innovative broadcasting of rugby. From having players mic’d up during matches to trialling the first ever ref cam in a professional match, they’ve done a lot for the exposure of the game.

But their latest endeavour will probably go down as one of the worst ideas in television.

You can’t help but feel a little sorry for pitchside reporter Natalie Yoannidis, who must have shared viewers’ opinion when she tried to get an interview out of Brumbies player Henry Speight, after the winger had just touched down for a try for the hosts.

What followed should be used as a lesson that, getting closer to the action isn’t always a good idea.

Clearly out of puff, Speight gave an almost gibberish answer, which left viewers and commentators none the wiser as what the Wallaby internationalist thought, and Yoannidis scampering off camera.

So with this in mind maybe it’s best to let the images, rather than Speight, do the talking!