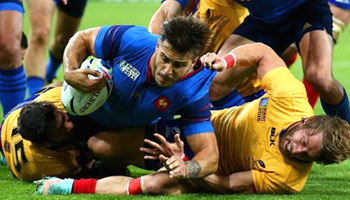 France overcame a first half scare to beat Romania 38-11 at the Olympic Stadium, picking up a try scoring bonus point and their second Pool D win in succession. Les Bleus featured 13 changes after beating Italy, and it was their youngest World Cup side in eight years.

After a slow first half, France managed to score twice before the break, then went on to score five tries in total. Sofiane Guitoune picked up a brace, with tries from Yannick Nyanga, Wesley Fofana and Gael Fickou. Romania scored a consolation try through Valentin Ursache.

France’s next fixture is against Canada in Milton Keynes, on 1 October.

MORE: View coach Saint-Andre’s angry halftime reaction, his calmer post match chat, and an interview with Romanian flanker Mihai Macovei, all on the next page