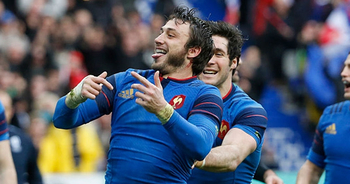 France scored a second half try to claim a 10-9 victory and their first win over Ireland in five years when they came out on top in Paris on Saturday. The only try of the match was scored by Maxime Medard with ten minutes remaining at the Stade de France.

France are now two wins from two, while Ireland, who drew 16-16 with Wales in the opening round, are yet to record a victory. They do however have one point, due to the tied match.

A meeting with Wales on February 26th is next for France, while Ireland face England the next day.

Coach Guy Noves paid tribute to the team’s tenacity and decision making when it counted most.

“I think the players won, not the coaching. That’s down to Guirado (captain, Guilhem). He chose to take a lineout rather than a penalty and after successive scrums there was a wonderful try on the back of it,” Noves said.

“I don’t want to hear that changing the props was the winning strategy. It’s a victory for all of the coaching staff. We worked very well this week and we looked at a lot of things that we didn’t do very well last week.

“I salute the players’ ferocious will to impose their game and not let Ireland dictate play.

“There’s a lot of solidarity between the players. The players who were in difficulty last week in defence had a huge game. If you add what we did well last week with the attitude we showed today, I think we’re starting to get on the right track,” said Noves.