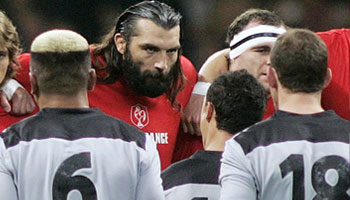 So where did it all go wrong for the All Blacks in their crunch Quarter Final encounter with the French on the weekend?

It started with the toss of a coin to decide who would wear the alternate kit. New Zealand lost it, and due to France’s extremely dark blue kit that is very similar to the traditional All Black kit (coincidence?), the favourites were forced to wear their pyjama grey jerseys with black shorts.

Most players would tell you it didn’t phase them, but deep down you can be sure they felt just a bit awkward. After all, the foundation of All Black dominance, intimidation and history is based on that famous black jersey.

With the formalities out the way and kick off seconds away, France lined up to accept the Haka. But instead of standing in their own half, normally on the 10m line (or if you’re Italian, huddled in a circle hoping it would just go away!), France stood firmly on the half way line, inches away from their New Zealand counterparts.

The look on some of the All Blacks’ faces was priceless, and you could see they were just a little put out.

The confrontation was classic, with a large amount of eyeballing and staredowns, even after they’d finished. In my opinion, France certainly got the most out of the traditional challenge.

They knew that if they stood a chance against the All Blacks they’d have to stand up to them from the beginning and not be intimidated.

“We talked about it three days ago,” France captain Raphael Ibanez told a press conference.
“It was not a provocation but we wanted to show them that we are proud.

“We feel a great respect for the New Zealanders but today the courage and pride of this team made the difference.”

And a difference it surely made, with the French sensationally knocking the tournament favourites out and sending Paris into raptures.