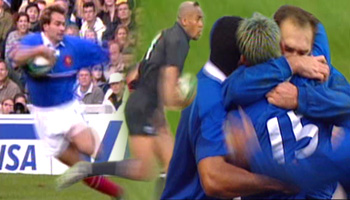 In 1999 the All Blacks were completely dominant in every match they played at the World Cup. They were looking like the best side in the world and were odds on favourites to take the cup.Tonight we see a repeat of the classic ’99 match between France and the All Blacks.

And halfway into the match they looked in control. Jonah Lomu was at his ultimate best, pounding the French whenever he got the ball. His two tries are absolute classics, beating numerous players with his speed, stepping and most of all, brute strength.

France came back though, and through some inspirational play and typical French flair, defeated the undefeatable and knocked out the best team in the world. A sensational result that shook the rugby world and was touted by some as the greatest World Cup upset of all time.

Fast forward eight years to the present. The All Blacks are once again looking invincible. They’ve once again played the best rugby and set the standard of world rugby, probably for the past 15 years. And once again, people are saying that the men in black are odds on favourites.

As for the French, they’ve started slow this year and had a hiccup against Argentina in the opening game. They came back strong though and found their straps against Namibia and Ireland. Unfortunately for the host nation they won’t be playing in France tonight – the game is in Cardiff for some reason.

That, combined with the unpredictable French flair could mean that we may see a repeat of that 1999 Semi final classic. For the neutral it’s a very interesting prospect indeed.