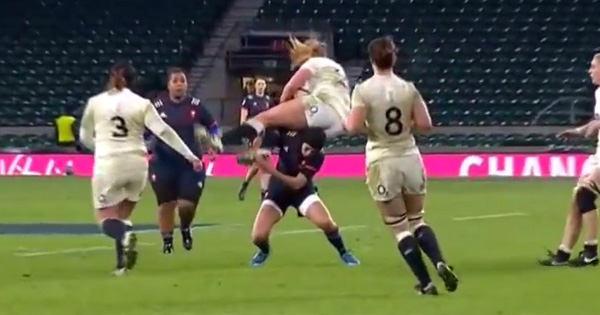 France replacement winger, Caroline Boujard, has been cited for this dangerous tackle in the Women’s Six Nations match against England on Saturday. She was yellow carded at the time but was later cited by the independant Citing Commissioner, facing a hearing today.

Boujard tackled replacement Poppy Cleall in the air from a restart kick, flipping her in a dangerous manner that led to the player needing treatment and having to leave the field.

The offence, under Law 10.4 (i) – tackling a player in the air, states that a player must not tackle nor tap, push or pull the foot or feet opponent jumping for the ball in a lineout or in open play.

UPDATE: Boujard was suspended for 2 weeks

Ms Boujard accepted that she had committed an act of foul play which was worthy of a red card, and claimed that the action had been reckless rather than deliberate.

The Disciplinary Committee, chaired by Achille Reali (Italy), alongside Pamela Woodman (Scotland) and Jennifer Donovan (Ireland), having reviewed the footage of the incident and all other evidence, as well as hearing submissions from the player and her representatives, agreed that the act was reckless, and categorised the offending as low end, which carries a four week entry point under World Rugby’s sanction table.

The Committee further determined that there were no aggravating factors and the player had meet all mitigating factors permitted, and therefore decided to reduce the entry point by two weeks.

The player is therefore suspended from playing rugby for a total of two weeks.

Taking into consideration that the player has no scheduled matches on the weekend of 18/19 February, the player is suspended until mid-night on Sunday 26 February.  The player is therefore eligible to play again on Monday 27 February.