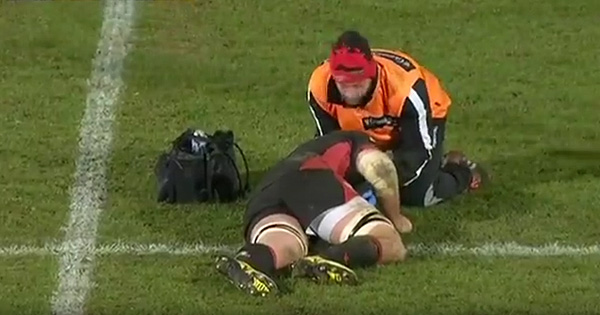 During his side’s narrow 24-18 defeat to Ulster last weekend, Edinburgh’s Fraser McKenzie suffered a nasty looking injury after coming off second best in a collision with Tommy Bowe.

The second-row appeared to attempt a block on Bowe, who was chasing down an up-and-under, but left the field on a stretcher after copping a solid hit from the winger.

There was no intent from Bowe and it was more a case of both players being in the wrong place at the wrong time. McKenzie’s intention to block however, certainly played a part in getting himself injured.

While the debate over whether a player is maintaining their line or explicitly obstructing another player will continue, McKenzie appeared to know exactly what he was doing, and paid the price for it.

It was a bizarre incident which, against most odds, saw the 18st McKenzie crumble to the floor while Bowe continued on as if nothing has ever happened.

The former Sale player, while injured enough to be stretchered off is fit for Edinburgh’s match against Leinster tonight.

What is your take on McKenzie’s block? Should these be phased out by officials?