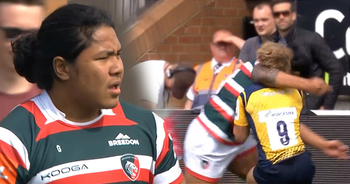 Look out world, there is another Tuilagi on the loose. This time it’s Freddie Tuilagi’s son, and if first glance is anything to go by, he looks every bit as menacing as the rest of the famous family. His entry to Premiership 7s didn’t go too well though, coming to a halt just seconds in.

At the Singha Premiership 7s at Kingston Park young Tuilagi was blown up just seven seconds into Leicester Tiger’s match against Worcester Warriors.

It could well be one of the quickest ever yellow cards issued in any form of the game.

Fred Junior is yet another in a long line of Tuilagis to have played at Leicester in the last 15 years, following on from dad Freddie, uncles Henry, Alesana, Anitelea, Vavae and Manu, as well as older brother Brian.

All eyes will be on him as he looks to make the step up to the big time, with massive shoes to fill.

Despite Tuilagi being off the field, and the Tigers having another player sinbinned too, they held on after a missed Warriors conversion late in the game meant that they won the match 26-24.

View the match highlights on the next page