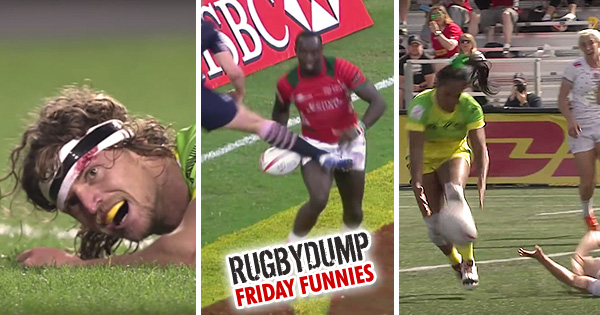 With its first Summer Olympics showing for 92 years just around the corner, the eyes of the world are rightfully on Rugby 7s. The timing is right: 2016 has displayed some of the best action in recent years, however we have also seen some of the worst.

With nations like the USA (Olympic champions in 1924) and Kenya stepping up, we are seeing more household names in 7s than ever before. The only issue? With all the eyes on Sevens, you’re bound to witness some serious clangers!

Nick Cummins’ try scoring blunder kicked off proceedings and set a ripple wave right down the 7s circuit. So popular is the “Honeybadger”, that even the Australian women were coughing up tries.

But far from us poking fun at those who have missed tries, the following two videos are testament to defence. As the old junior rugby saying goes: “Play to the whistle.”

The first butchered try is Kenyan player Oscar Ayodi, who had plenty chances to touch the ball down against Scotland.

Ayodi instead tried to offload in the dead ball area to his team-mate, which led to the slightly comical scene of Scott Wight somehow getting his foot in the way, preventing the score.

Unconventional defence there, but the second shows more technique and downright grit.

Mahalia Murphy and her team mates did everything possible to get over the line against England, but perhaps a bit casual in the ingoal area, Murphy was tackled hard and the ball was dislodged.