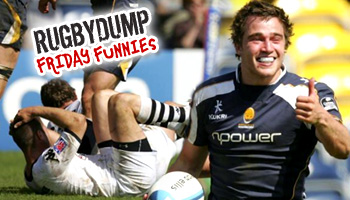 Worcester held off a brave Brive come back in the European Challenge Cup as the French side came back to within four points of the home side, after being down 17-3 after tries from Marcel Garvey and Pat Sanderson.

Ronnie Cooke scored two for Brive, keeping them in the game before Worcester scored another of their own, this time in strange circumstances.

Flyhalf Matthew Jones penalty kick flew high off to the right of the posts, looking like a regulation miss and a waste of a possible three points.

Brive made an unforgivable error though as they watched the ball sail wide before it dropped suddenly in front of the man who looked like he had it under control.

The sun obviously played its part, as at the last second he pulled out of catching it, allowing it to bounce for the chasing Alex Grove who snapped it up and scored. Garvey scored again later in the match, sealing a 29-18 win for the home side.

Similar to the Cliff Myton try of 1998 , this try shows why following up a penalty kick can prove fruitful. The Brive player lying on the ground with head in hands afterwards is pretty amusing too.