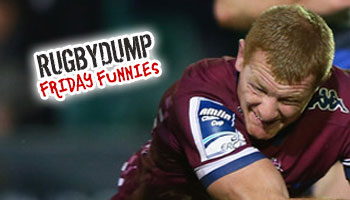 Not since George Robson slipped when leaving the change room a few years ago have we seen such an ominous start to an evening’s rugby. In Robson’s case he slipped, but for Bordeaux’s Australian lock Cameron Treloar it was a case of forgetting that he is actually 6ft7, and not ducking.

He probably should have considered just turning around after those first few steps as Bath won the game 54-13, scoring eight tries to maintain their 100% record in pool two of the Amlin Challenge Cup. They head through to the quarter finals with 28 points from their six matches.

This is just a quick clip that was requested by someone who found it hilarious when seeing it live on TV last Thursday. No disrespect intended to big Cam, of course. Remember that if you see something this weekend that you think should be shared on RD, get in touch and we’ll take a look.