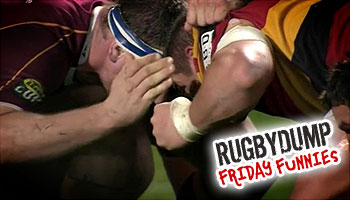 Unfortunately there hasn’t been time for Magners League or Aviva Premiership highlights this week but hopefully tomorrow I’ll get some time to post something. It is Friday though, so time for a laugh with the latest Friday Funnies clip.

This one comes from Southland’s meeting with Waikato in the ITM Cup in New Zealand, a match that was low scoring but resulted in Southland continuing their winning run in the tournament. You can view highlights of the match here, in yesterdays post.

This particular moment was picked up by a forum member who watched the game live and took the time to send in the request. If he’d not done that, classic moments like this would be missed so please try do the same when you see something happen that you think would be good to share.

There’s been a lot of debate lately about the way refs are handling the scrum engagement, with refs down south in New Zealand and South Africa deliberately taking ages to do the call, while up North it’s more regulation and what we’re used to. There are critics of both, as some say the old way isn’t steady enough, while others don’t like the slow, delayed calls down South.

What the delay did produce however was Southland prop Chris King doing something you won’t often see at scrumtime. Somehow the ref spotted it though, penalising him and allowing Waikato to snatch three points in a tight game. We can’t condone it, but it was hilarious to watch.

Have a great weekend, and keep your hands to yourself. Cheers

Eddie Jones believes Marcus Smith will only realise his full potential in his “late twenties” but Harlequins attack coach Nick Evans thinks his mercurial outside half is already operating at a stratospheric level.