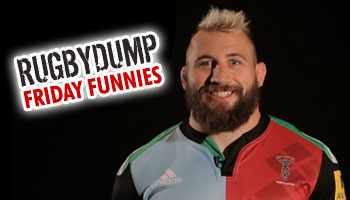 Joe Marler is at his best in front of camera. He’s a pretty good rugby player too, obviously, but as fans have picked up on, the guy has great banter. Here the Harlequins prop talks about what goes on in the team bus, and his amusing pets.

Marler recently took up the skippers’s role at Harlequins, after Chris Robshaw stepped down to focus on the England captaincy. The 24-year-old has said that he’s looking forward to starting things well against London Irish in the Twickenham Double Header next weekend.

“The Double Header is always a great day, but in the past both teams have been a bit negative against each other, so hopefully we can play some good rugby and have a good day,” he said.

“I love a little London derby and to be honest I think it needs to be a little bit more derby-like. We’re getting a bit itchy and excited to get out there for the Double Header now.”

“Pre-season has been as brutal as any other pre-season, but it’s gone really well. Most of the boys are in great shape although some aren’t in such good shape and I’d probably be in that category.”

More of Marler in the Related Posts below, and more humour in our aptly named funnies section