Friday Funnies - Nigel Owens is straighter than this lineout throw 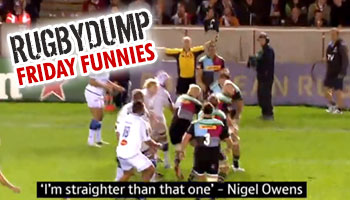 Referee Nigel Owens has always fancied himself as a bit of a comedian on the field. The openly gay referee has actually done a bit of stand up comedy in his time, and also happens to be arguably the best referee in the world these days.

While he’s been criticised as liking the spotlight a bit too much at times, there’s no denying that he is a funny man, and if he lets the game flow and positively influences some of the classic matches we’ve seen of late – particularly in the Rugby Championship – then more power to him.

If you didn’t know already, Owens is gay, so the not straight comment was as amusing as it was refreshing to hear. You’d imagine it probably threw the front rowers slightly though.

You can view more of Owens’ quips in the Related Posts below this, which include him telling off 30 grown men, pointing a player in the direction of a football field, and his ‘This is not Soccer’ line.

You can always watch a really interesting feature on him from ITV a few years back, where he talks about stand up comedy, steroid use and contemplating suicide. Those dark days are over, and now he simply excels on the field with his refereeing, and the occasional comedic sideshow.