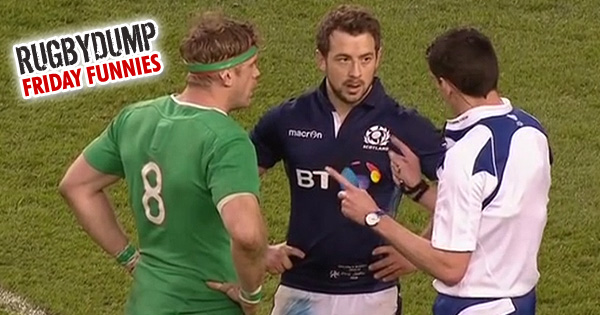 Players should quite obviously never place their hands on the referee, so it’s always strange to see when some refs take it upon themselves to jump into the middle of a scuffle to attempt to break up something that other than their whistles, they are simply not equipped to take care of.

This short clip from a bit of tussle between Ireland and Scotland proved quite popular on our instagram last night, so we’re sharing it on the site too, as it was quite fascinating to see.

It’s amusing not only because he chose the smallest man on the field, but the look on Laidlaw’s face for those few split seconds was also priceless.

It probably also opens up a wider debate about this type of thing happening, as over the years there have been a number of officials who like to ‘step in’, endangering themselves in the process and creating a situation that could easily end badly, but should always be avoided.