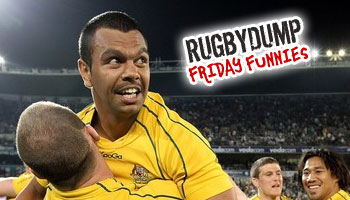 It’s almost been a week since the incredible test match between the Boks and the Wallabies in Bloemfontein. Who will ever forget the way the game was won, with Kurtley Beale slotting the match winning kick. He will be remembered for another great moment too though, this classic falcon a few minutes from time.

Young Kurtley Beale has been moved around a lot throughout his short career. A star junior, Beale was touted to make the transition as a top class flyhalf. Things didn’t quite go to plan though, despite coaches desperate to get a man of his talent on the park.

He’s played flyhalf, centre, and now finds himself at fullback, a position he’s shone at of late. The man himself says he’s just happy to be in the mix. “Wherever I’m needed I’ll be more than happy to help out, but at the moment we’ve got Quade, Berrick Barnes, Matt Giteau and Anthony Faingaa at flyhalf and centre,” said Beale.

“I want to concentrate on one position, though. If you get chucked around you don’t work on the little things you need to pay attention to.”

In the last two tests he’s showed his flair, with one break in particular at Loftus Versfeld tearing through the heart of the Springbok defense. It was in Bloemfontein though that we all witnessed this classic falcon (an Aussie term for being hit in the head by the ball).

It led to three points for the Springboks, and high embarrassment for Beale, but the measure of the man was seen only a few minutes later as he stepped to slot the winner penalty from over 50 meters out.

“I didnt know who was supposed to take the kick; I was busy looking for Gits, but hed left the field. But most of the guys wanted me to take the kick, and I knew I had to stick to the process and not worry about the crowd. I hit it well, but I saw it drifting and I had to wait until the touchies raised the flags,” said Beale afterwards.

“Its definitely a career highlight. To win a match for the Wallabies, it doesnt get better.”

Coach Robbie Deans was full of praise for his side, and for Beale, who he had faith in.

“I knew it was always going to be a good prospect with KB [Beale],” Deans said. “It must have been pretty humiliating to take a ball in the head in front of a capacity crowd, but he showed a lot to nail that kick,” he added.

Both are classic moments from a fantastic test match, so this clip captures a bit of both.