Friday Funnies - The Samsung School of Rugby, with Jack Whitehall 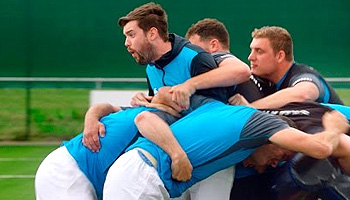 Samsung have launched a humorous new campaign that features comedian Jack Whitehall taking on England legends on the training field. Martin Johnson and Lawrence Dallaglio put him through his paces, along with the likes of Jason Robinson and Maggie Alphonsi.

The campaign leads with six short videos, all themed around key attributes of rugby. It focuses on Whitehall being schooled in the sport by a who’s who of England rugby legends, as they talk him through elements of the game with hilarious effect.

“Rugby is a fascinating and sometimes utterly baffling sport and the Samsung School of Rugby offers a light hearted look at the game to really get people excited about rugby,” said Whitehall. “I had to sacrifice my health and well-being as I battled it out against the likes of Lawrence Dallaglio and Jason Robinson but think the end results are worth it.

“Though I doubt Martin Johnson will want to ever see me again.”

There is also an additional 360-degree virtual reality shot that provides a completely immersive experience, with fans able to experience a lesson up close with Jack.

Watch all the videos below, or if you can’t see them, click view all now

Martin Johnson and Lawrence Dallaglio teach Jack Whitehall a lesson in power. Jack starts confidently but how will he fare in a maul with Jason Leonard?

Jack Whitehall questions England Legend Martin Johnson on the importance of style in rugby. Lawrence Dallaglio quickly puts Jack to the test on the pitch. Can he swan dive like Jason Robinson?

Jack, a self-styled speed merchant, joins England Legends Martin Johnson, Lawrence Dallaglio and Jason Robinson where he quickly learns he is all talk and not much faster than a walk.

Jack Whitehall tries his hand at tackling under the guidance of England Legend’s Lawrence Dallaglio and Martin Johnson. However when Lawrence suggests Maggie Alphonsi as tackling partner things go downhill for Jack.

England Legends Martin Johnson and Lawrence Dallaglio teach Jack Whitehall the importance of accuracy in a lineout situation. Can he go up against an England Legend and win the ball?

Immerse yourself in this interactive 360 degree video as Rugby Legends, Lawrence Dallaglio, Martin Johnson, and Jason Leonard try to teach Jack Whitehall the fundamentals of Rugby. But will they able to recreate England’s famous drop goal? Simply drag on the video.