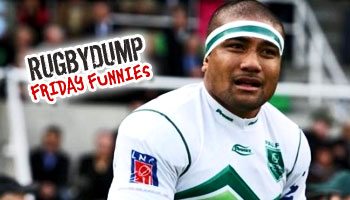 Here is a bizarre passage of play from France’s second division, Pro D2, and a game between Mont De Marsan and Pau. So much happens here that it’s actually pretty difficult to explain, but as with the officials on the day, we’ll give it a shot.

Mont De Marsan were on attack with just minutes left in the game, and the win secure. Pau had desperately been trying to get into the match but couldn’t get their hands on the ball.

That is until it was robbed from the opposition in what looked like an illegal fashion, so everybody stood still and waited for the referee to make a decision.

As you can see, Pau didn’t wait around and the break down field occurs before someone chases back in cover, and quite possibly attempts to trip the ball carrier with his foot.

Eventually the ball gets to Samoan number eight Marlon Solofuti, who trots casually over the tryline to score what looks like the easiest of tries, but then decides that slamming the ball down Gridiron style is the best way to go.

What happens next is even more bizarre, as after consultation with an assistant referee, the try is awarded, and the game ends with boos from the crowd.

It’s a true hero-to-zero, to hero, moment for Solofuti, and quite possibly one of the strangest tries ever scored, even if it actually wasn’t.