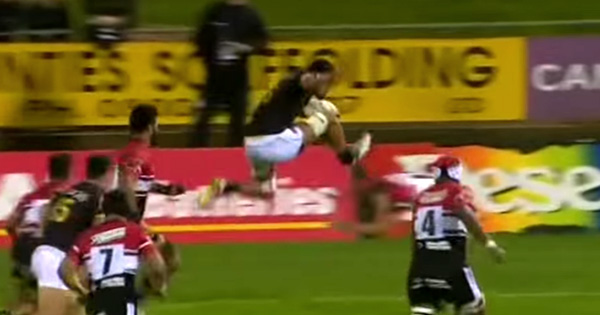 The Wellington Lions pulled off a dramatic win in the Mitre 10 Cup Cup earlier today, beating Counties Manukau at the death. Earlier in the match though it was this incident that left a lot of onlookers with jaws wide open, none more so than the would-be tackler.

After a great break down the wing and lovely piece of play, flanker Vaea Fifita got the ball then decided to literally leap over defender Piers Francis, who despite not being extremely low, was still cleared with absolutely no contact between the two.

“He went down low for the hit, but there was no one there,” joked one of the commentators.

It was an almighty jump by the 24-year-old, and surprisingly for many, didn’t lead to a penalty.

The lawbook doesn’t state anything with regards to jumping into (or over!) a tackle, but it is commonly known to fall under dangerous play, with Law 10.4 covering Dangerous Play, and section (k) covering “Acts contrary to good sportsmanship.”

We saw Sione Kalamafoni penalised when he did the exact same thing in 2012, being told by the referee “You cannot jump over a tackle.. you run, don’t jump”.

Two years prior, in 2010, Wallabies flanker Rocky Elsom was penalised for jumping into a tackle, being told by the referee  “You jumped into the tackle.. it’s dangerous play”.

We have seen a number of players get away with this though, namely Shane Williams in that same year, as he hurdled covering defender Topsy Ojo, and in 2008 Fijian Viliame Satala dived over the tryline, but there were two players in front of him. The try was awarded.

Check out our Related posts for these and other similar moments, and let us know what you think of Fifita’s exploits and if you think it should or shouldn’t have been penalised for dangerous play.

ALSO: Scroll down to watch the highlights from the match, with an incredible dramatic finish