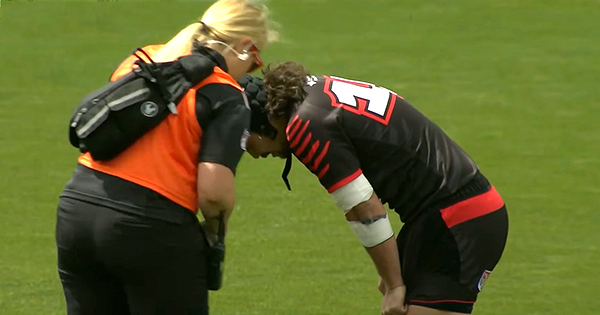 It’s just three rounds into the inaugural MLR season and there is already a contender for hit of the season after Glendale Raptors’ Number 8 ended a Utah Warrior with a monster tackle.

Fullback Don Pati did well to field a kick over and ghost through the opposition defence, but encountered one player too many as Glendale Raptors’ Sam Figg smashed him.

The impact seemed to shake both players as they both stayed down afterwards, although Figg seemed to come off worse. He received treatment but continued playing a few minutes later.

The big tackle had a touch of irony to it as one of the commentators, a few seconds before the hit, said Pati was “one of the toughest players to tackle”.

Figg is a former Australia Sevens representative and is one of the more well-known names in the new American league, while Pati was born in Samoa but has represented the USA in Sevens.

Glendale Raptors went on to win 36-29 to maintain their perfect record in the league, with Figg, Mika Kruse, USA internationals Peter Dahl and Bryce Campbell, and the amazingly named Harley Davidson all scoring for the away side.