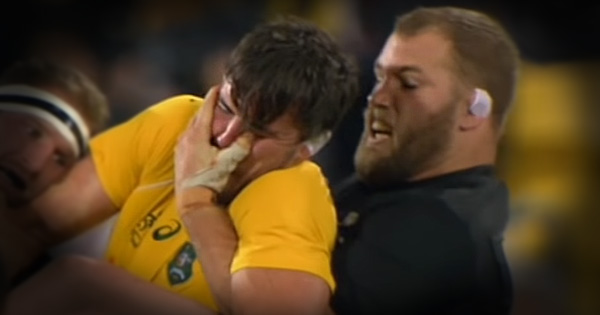 Here are a few more viewpoints, and another angle, on the Owen Franks eye-gouging incident this past weekend. In the above video we get to see things from a New Zealand perspective, then below is a discussion from the Fox Sports crew in Australia.

Kane Douglas, the Wallaby who was on the receiving end of it, has since told the Courier Mail in Australia that he didn’t feel it amounted to an eye-gouge.

“I didn’t think of it like that. It was an All Black trying to stop me driving through the maul, arms everywhere and everything happening in a few seconds. I’ve got no issue at all but obviously you want to be protecting the eyes of players.

“I probably didn’t realise how bad it looked until after the game (when watching replays). My eyes were fine and it all happened so quickly, I was on to the next thing in the game,” Douglas said.

Yes, thankfully his eye was not injured but that does not mean that Franks didn’t infringe on the very clear laws set in place by World Rugby. Countless players have already been banned, usually for around 8-12 weeks, for incidents that appear far less clear cut.

A precedent was set a while back, and the likes of Chris Ashton (10 week ban) and even Richie Rees (12 week ban) have had to sit out due to their fingers being way to close to the ‘eye or eye area’ of another player. With those same standards seeminly in place, it’s baffling that Franks was not in trouble for this one. Consistency is all anyone wants, and of course to protect the eyes of players.

So conspiracy theories aside, it seems that the powers that be really dropped the ball on this one.

And although they have overuled an independant citing decision before, World Rugby are not able to get involved in a SANZAAR case, as per the rules of competition.

GET OVER IT, BRIAN

Also, below is another piece from The Breakdown, in which the guys tell Brian O’Driscoll – who was very outspoken on the incident – to get over it, making slight reference to his issues with New Zealand following the 2005 spear he received on the British & Irish Lions tour.

Let us know your thoughts!