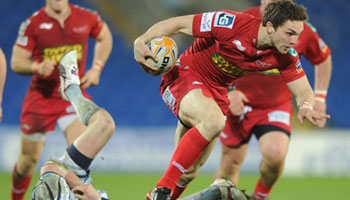 Star Welsh winger George North made his return to the Scarlets this past weekend and proved vital in their win over the Cardiff Blues, as he came on late in the match and showed more of his Six Nations form to set up a lovely try.

North, still just 19 years old and already having racked up 21 Test caps, came off the bench and made his impact immediately. His strength and balance saw him burst through the tackle of Welsh wing team mate Alex Cuthbert, which allowed him to pop the ball to flying lock Dominic Day.

Cuthbert had a mixed game as he made some awful mistakes, but then on occasion provided moments of magic, including an intercept try. North got the last laugh though, and one up on the lanky Blues winger with this strong run.

North is a serious contender for the British & Irish Lions tour of Australia next year, and is arguably the most exciting young winger in world rugby right now. The Scarlets have done well to hang onto him, and earlier this week he stated that he’s not going anywhere.

“I’m very happy down at the Scarlets at the moment,” he told the BBC.

“I’m getting game time on the pitch and at my age that’s what you want to get, a bit more exposure and experience out there. I can’t see myself going elsewhere right now. I’m enjoying my rugby in Wales. I’m there for two years now. So happy days really.”

This try may not be mindblowingly amazing as there was a straight missed tackle, but many of you will be keen to see the one-on-one between the two Welsh wingers, and of course more of North in action. The support play from second rower Day is nothing to be scoffed at either.