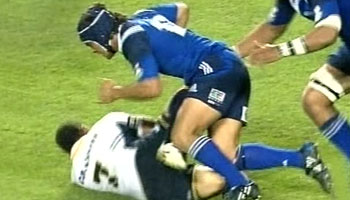 Brumbies and Wallabies flanker George Smith is one of the most talented players in the game. He’s an absolute master with the ball in hand, and is one of the best ball stealer’s on the ground.

Smith is a also a great distributor who’s highly talented. He often looks like an extra back line player who is capable of the impossible at times.

He’s not a huge guy though, and so when charging at the line is never really going to bash someone out the way, as he found out on the weekend against the Blues.

Young Benson Stanley is the nephew of All Black centre Joe Stanley, and from what we’ve seen of late, the skill and strength run in the family.

Deceptively strong, Stanley wasn’t interested in Smith’s charge at him on the weekend. A much smaller man, he still managed to put in this great hit on the Brumbies flanker Smith.

In the same minute, a couple of phases later, Smith got hit hard again, this time by big Eighth man Nick Williams.