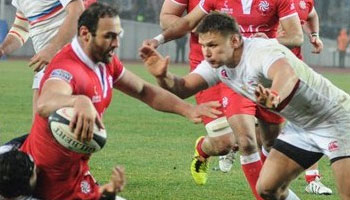 Last weekend Georgia and Romania secured their places at Rugby World Cup 2015 following victories in the FIRA-AER European Nations Cup Division 1A. Georgia beat Russia 36-10 in front of over 50 000 fans in Tbilisi, while Romania beat Spain 32-6.

The team that finishes top of the ENC table will secure the prestigious Europe 1 place at England 2015, joining New Zealand, Argentina, Tonga and Africa 1 in Pool C.

Romania and Georgia have an unassailable lead in the competion, which doubles as RWC qualification. The runner up will join Pool D with France, Ireland, Italy and Canada.

The two teams face off in Tbilisi on March 15th to decide Europe 1 and 2.

IRB Chairman Bernard Lapasset was present to witness the great occasion in Tbilisi.

“The European process has been a highlight of the Rugby World Cup qualification process delivering some incredibly competitive and compelling matches,” said Lapasset.

“On behalf of the IRB I would like to congratulate both Georgia on Romania for booking their places at England 2015 where they will showcase the best of European international Rugby. The scene is now set for a fascinating contest in Tbilisi where the coveted Europe 1 place looks to be decided.”

EXTRA: View both full matches on page two of this post

The IRB will be providing a live stream of the decisive match in Tbilisi on rugbyworldcup.com

Watch the Georgia vs Russia full match above

Watch the Romania vs Spain full match above