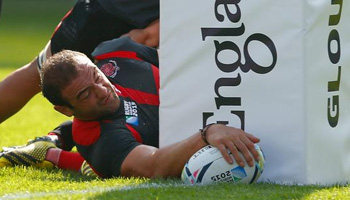 Led by man-mountain Mamuka Gorgodze, Georgia upset Tonga in the opening match on day two of RWC 2015. In a hard-fought and at times scrappy match, the Georgians got the better of the Pacific Islanders, scoring two tries to win 17-10 at Kingsholm.

Georgia made an incredible 213 tackles to the 48 of Tonga as they held off the perceived threat of the Tongan flair to come out on top and achieve a famous victory.

Gorgodze was immense as always, but one of the most impressive players was young Vasil Lobzhanidze. He became the youngest ever player to appear at the Rugby World Cup, at just 18 years and 340 days old. His snappy service and courage played a huge role in the victory.

For Tonga, former Highlanders star in Super Rugby Fetu’u Vainikolo became his country’s highest ever tryscorer as he crossed for his 15th try. It wasn’t enough though as Georgia didn’t give an inch, pleasing their extremely vocal travelling fans.

View all the match highlights in the updated video below.

Follow @rugbydump for more updates, and keep an eye on our RWC section too