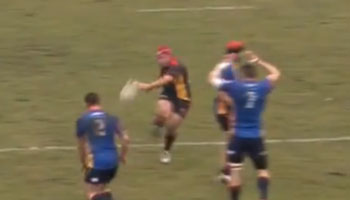 Rugby World Cup 2015 attendees Romania beat Germany 17-12 in their European Nations Cup Division 1A match in Heidelberg. The visitors scored the only try of the game, but with Germany trailing and time almost up, the hosts snatched a losing bonus point.

Hooker Dale Garner, of Stourbridge RFC (a National 2 North club in the UK), was involved in the build up at 0-3, and obviously realised that a try wasn’t on as they didn’t have much momentum. So after hopping up off the floor and grabbing the loose ball, Garner went for a snap drop.

The result, three points for his side, which led to them getting within seven by the end, and achieving a losing bonus point against a traditionally much stronger side. Not bad for a front rower.

*This write up has been edited due to incorrect facts at time of writing.