Get Excited For The Rugby World Cup, Less Than Six Months To Go 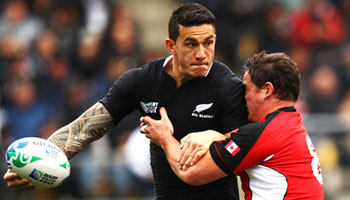 On the 18th of September England will take on Fiji at Twickenham to end the four year wait since the last Rugby World Cup. Much has changed since then, not least the players for whom the immense challenge lies ahead. A look back at 2011 plus a look ahead to this year’s tournament is sure to get your pulse racing.

Since the maiden tournament in 1987, the Webb Ellis trophy has been held aloft by four separate countries, twice by each southern hemisphere giant; New Zealand, South Africa and Australia, and once by England.

No team has ever successfully retained the World Cup, but All Blacks supporters will harbour cautious optimism that their nation can buck the trend, as since the 2011 Final the Kiwis have only lost on two occasions – an undeniably intimidating and formidable track record.

Anticipation for northern hemisphere fans will be as high as ever. After a record-breaking RBS Six Nations, including a final weekend where free-flowing rugby brought high scoring matches, a home World Cup affords the supporters guarded positivity.

The 2011 competition was rife with impressive rugby and controversy in equal measure. A straight red card for Wales captain Sam Warburton in their semi-final clash with France saw the men in red suffer a single point defeat, as their first ever world cup final disappeared before them.

France went on to face the All Blacks, and despite famously challenging the Haka, they suffered a loss as New Zealand reigned victorious for the second time. A result, which most rugby critics would agree, saw the trophy heading to undoubtedly the best team in the world that year.

New Zealand remains the top pick for the 2015 World Cup, with strong +175 odds to win it all according to the following online sportsbook.

The largest competition welcomes the world’s rugby elite, and with it the ultimate prize. The stage is set for a thrilling tournament and September can’t come soon enough!

The video below shows some of the highlights from four years ago, accompanied by that incredible song it is sure to get your thoughts racing and your heart pumping – with less than 6 months to go, who do you think will win this year’s tournament?

Check out the Related Posts for some of the greatest moments from the Rugby World Cup.