Get to know more about Gloucester and England wing Jonny May 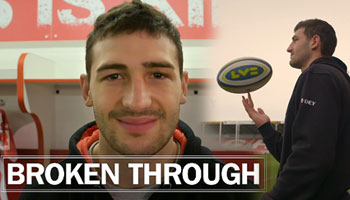 Jonny May has been selected for England against Wales in this weekend’s Six Nations opener on Friday night. Here is a great video put together by LV= that is an intimate look at how he rose to prominence, from his days at Wotton Basset rugby club, to scoring against the All Blacks.

As a youngster May always dreamed of playing for England. He started making strides in that direction when playing for Gloucester in the LV= Cup in 2012. Two years later and he has 11 caps to his name, as well as one of Twickenham’s greatest ever solo tries under his belt.

In this film Jonny and his father Peter tell us how the support of the family and friends, as well as the breaks he got from his performances in the LV= Cup, have helped get him to where he is now.

For more interesting videos of this nature, take a look at our Player Features section